Marketing is a vital part of business operations, as it promotes the business brand, products and, importantly, what they stand for, hopefully in front of the company’s target audience and ultimately grow their customer base and sales.

However, every business differs in its products, services, customers, target audiences, distribution and many more factors. So, the success of every marketing strategy depends on market insights, informed strategy and appropriate budget allocations.

In order to develop an effective marketing strategy and maximise outcomes, businesses have to understand their own industry trends and inform themselves about major players within the industry in order to identify threats and opportunities (to their business), prior to potential disruption of sales, but also jumping on any first-mover competitive advantages there may be.

An in-depth analysis of regulations and risk factors, such as impacts of political and financial fluctuations will help risk mitigation or avoidance of some costly missteps down the track.

The importance of an overview of industry external influences, such as substitute and complementary industries is commonly underestimated. Strategy informed with industry insights allows a business or company to position themselves to add more value to their customers’ lives, and also helps to define and improve the company’s Unique Selling Proposition (USP), i.e. that X-Factor.

A crucial part of market research is the identification and profiling of target customer groups. This will inform the development of new products and/or services, as well as assisting in targeting marketing campaigns, maximising outcome, whilst minimising expenses, i.e. reducing expenditure in areas where it is not needed as urgently.

Every company aiming for sustainable growth and success should trial new products and services and give their customers a voice – they can tell you everything you need to know. This will identify areas of improvement, growth opportunities and minimise of risk exposure. Key Performance Indicators (KPIs) should be implemented and used to measure the success and effectiveness of every marketing strategy and campaign and ensure that organisational objectives are aligned with appropriate budget allocations.

These combined, will then empower a business to effectively allocate their budget accordingly to needed areas, maintain good relationships with suppliers and distributors, and ultimately maximise customer satisfaction and value.

Get your facts and seek feedback to make the right decision!

Many factors influence businesses but few pose as great a risk as political risk. Understanding and forecasting the political landscape and its risks should be an essential part of every business’ operations. Market Research enables management and decision makers to make informed decisions, identify opportunities and, importantly, mitigate risks.

Staying informed on political risk factors influencing and impacting your company is very time consuming. Market research streamlines this process by providing your business with insights tailored to your needs.

This is an overview of major political trends, likely to affect a range of different industries.

In 2017, a number of issues have fractured the Australian political landscape, but not limited to: citizenship scandals; energy and climate crises; the continuous asylum seeker debate; increasing conflicts between moderates and conservatives; and the list goes on. These have weakened not only, the Labor Party but also the coalition and have ultimately affected the security of Malcom Turnbull’s leadership.

The hope of a “lasting energy framework” after Alan Finkel’s investigation into the security and reliability of the electricity market was disappointing. Finkel’s “Blueprint for the Future”, outlined an action plan to repair the Australian electricity market by introducing a Clean Energy Target, to conform to the Paris Climate Change Agreement. This was starkly opposed by coal advocates and argued that 42% of renewable energy by 2030 was too ambitious and would put service reliability at risk. The Greens also criticised the Blueprint as a “short-term political fix”.

The government now supports the new proposal of a National Energy Guarantee (NEG), proposed by the Energy Security Board. The NEG recommends a reliability guarantee and an emissions guarantee.

The new proposal has already been criticised for renewables’ incentives being revoked and for the lack of penalties for corporate non-compliance. The details of this plan will be released in April 2018. It remains to be seen if the new proposal will withstand the challenges from different interest groups.

The decommissioning of offshore detention centres on Manus Island, Papua New Guinea and Nauru, as well as the forceful removal of the remaining asylum seekers has provoked global condemnation and affected our relationships with the rest of the world. However, the offshore asylum seeker processing topic remained one of few where the coalition was united under Turnbull.

The global phenomenon of a continuous split in the political right is very tangible in Australia. With Tony Abbot seeking to position himself as the new voice of a Liberal conservative Australia, in direct challenge to Turnbull’s leadership.

Last year was marked by an increasingly rebellious Coalition, with backbenchers openly defying Turnbull’s authority. An example of this breakdown saw Senator Bernadi openly defecting from the Liberals and establishing his own, the Australian Conservative Party.

With growing pressure from his own ranks, Pauline Hanson’s One Nation inspired the Nationals to publicly challenge the Turnbull government, forcing a Royal Commission into the banking sector against the Prime Minister’s will.

Things got a little heated when Turnbull recently and openly critiqued former Nationals leader Barnaby Joyce for his relationship with a former employee. The following resignation by Joyce might just place more strain on a fragile Coalition relationship.

Whilst Labor’s strategy of “sit[ting} back and watch[ing] the Coalition self-implode” saw the party in front of the Coalition in two-party polls, Bill Shorten still personally ranked behind the Prime Minister in a two-party preferred polls.

2017 saw a record number of parliamentary resignations owing to a new interpretation of Section 44, which raised questions over constitutional ineligibility of parliamentary membership due to citizenship requirements. The High Court found five MPs constitutionally ineligible, followed by two members of the government’s ministry, the Senate President and finally two cross-bench Senators. This issue of eligibility is largely unresolved, as additional referrals to the High Court have already been lodged and will roll into 2018.

Parliamentary eligibility issues will continue to dominate Aboriginal recognition matters. The rejection of the establishment of a First Nation’s Voice, recommended by the Referendum Council, was appointed to advise on meaningful recognition of First Nation peoples on civil rights grounds.  Any progress on the recognition issue is unlikely, as no goodwill remains between stakeholder groups and the government.

In 2017 Australia became the 26th country to legalise same sex marriage, following a 61.6% vote in favour. The postal survey was conducted despite harsh critique on the plebiscite strategy, for its non-binding nature, exclusion of oversea voters, security concerns, the constitutional eligibility of the ABS to conduct a plebiscite and the government’s justification to spend AUD$122 million of taxpayer money to conduct it. Despite the overwhelming vote in favour, the matter still seems unresolved, as the balance of marriage equality and religious protection remains highly debatable.

Considering the volatility of the past year, the political future seems hard to predict. Major new policies seem unlikely in the near future, though past issues seem likely to continue well into 2018.

When seeking to establish an effective risk management plan, success is highly dependent upon the identifying relevant risk factors. Market research can identify firm- and country-specific risks and distinguish between instability and/or government risk, helping you determine relevant threats effectively.

This is particularly important, as the nature of risk varies from firm to firm and is dependent on different exposures. As companies are rarely able to influence country-specific risk or even governmental risk factors, such as subtle policy changes, these can pose a great threat to businesses. Hence, it is of utmost importance to identify and effectively manage these risks. Market research can provide those insights needed to make relevant risk mitigation and management decisions, so that operations and financial performance can be better safeguarded going in to the future.

Uncover your risks with market research.
Contact us now for a free, no obligation, 2 hour consultation with our Principal analyst.

Can YOU afford the risk?

Market research and risk is something you do not always find in the same sentence but now you have!  We all have risk within our own businesses and while we cannot be rid of them (oh, do we wish we could), we can only manage them. Failure to manage that risk can potentially harm your brand or, worse, cost you your business.

Depending on your industry and business, risks can come in all shapes and sizes such as:

While these risks cannot be managed all at once (let’s be realistic here), it is important to remember that good risk management practice consists of taking small steps rather than being overwhelmed from the get-go.

Using good quality, third-party market research, you can identify, mitigate and prioritise risks in your business: 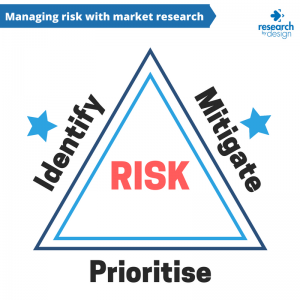 Understanding your market and customers helps you identify potential risks for your business, e.g. new competitors’ tactics, malicious suppliers, etc. Using this information, you can proactively develop strategies specifically targeting each of the potential risks that were identified in the research.

Ultimately, as the business owner or decision maker, you can prioritise these risks from the most pressing to the least important according to your mission, strategy and goals in the business. This could mean, for example, protecting IP around your main product (competitive advantage) is much more important than transport constraints due to a public holiday for a software company.

Depending on the industry and what your product is, risks can vary greatly between businesses. It is essential to use the power of market research to understand your markets, customers and external and internal influences to effectively identify, mitigate then prioritise your risks to avoid irreversible damage to your brand and business.

Unlock your potential with market research.
Contact us now for a free, no obligation, 2 hour consultation with our Principal analyst.