We have always been proponents for trade with our neighbours up north, the ASEAN Community, a name which was self-declared at the end of 2015. This help setup the ASEAN Economic Community which offers a framework for simplifying, standardising and facilitating economic trade activity between its member states.

As the world’s third-most populous economy (637 million) in 2016, after China and India, it presents massive opportunities for Australian businesses to engage and embrace this rapidly growing region. While only making up 3.4 percent of the world’s GDP, its average annual growth in GDP in 2016 was 4.6 percent, higher than the world’s average of 3.2 percent for the same period. The ASEAN Community also represents the third largest economy (US$2.5tn, 2016), only following China (US$11.2tn, 2016) and Japan (US$4.9tn, 2016). 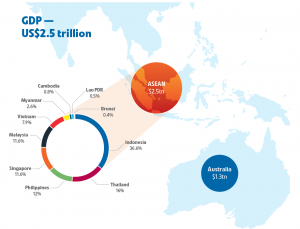 Australia has much to gain from embracing the growth in the ASEAN Community:

Australia’s lifestyle, products and services have a reputation of being high quality and are widely recognised. Businesses should take advantage of this reputation by tailoring an Australian solution to a Southeast Asian problem. We all mutually benefit.

Learn about how you harness the power of our neighbours. Don’t miss out.
Contact us now for a free, no obligation, 2 hour consultation about your research needs.

Historically, ancient Korean dynasties adopted an extreme form of Confucianism, introduced by the Chinese around 108 BC, to control citizens and safeguard the government by discouraging individual thinking or acting. The Choson dynasty later formally introduced a class system and officially prescribed etiquette kingdom-wide. These mandated manners are the foundation of a circumstantial morality system. Only those citizens that followed the conduct prescribed by the Confucian government were regarded as morally upright and proper, while those neglecting to do so were regarded as immoral and socially sanctioned.

Korea is widely regarded as the most Confucian nation worldwide, an important factor when considering engaging or interacting with the Korean business world. A hierarchical structure is deeply rooted in Korea’s authoritarian and militant history. Today, Koreans still relate to each other in a class system guided and defined by particular etiquettes and customs.

When engaging with Korean people in a business context (e.g. a business venture), understanding and respecting local custom and cultural norms is directly correlated to that venture’s success.

In order to establish a positive relationship, Korean culture demands the maintenance of stable environment of kibun, which can roughly be described in terms of pride, face, mood, or state of mind. Disturbing others’ kibun, by disregarding social hierarchy, giving negative feedback, displaying emotions or openly criticising someone is considered extremely impolite, as it disrupts the harmony between people. Koreans are willing to go to great lengths to maintain their and others’ kibun. This conditional cultural reflex can have detrimental effects on business ventures, as negative information may be withheld or softened for the sake of maintaining inhwa and not disturbing the other party’s kibun. Furthermore, a violation of a business partner’s or one’s own kibun might make the development or sustaining of positive, long-lasting relationships impossible and could potentially be very costly to the business.